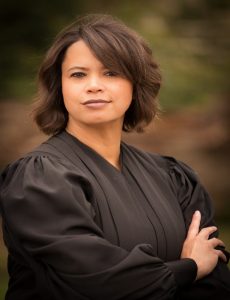 Judge Shaunn Caillier-Harden is a 1990 graduate of the Academy of the Sacred Heart who went on to earn a Bachelor’s Degree in Arts and Sciences from LSU in 1993 and then attended LSU’s Paul M. Hebert School of Law, earning a Juris Doctorate in 1996. She served as a Law Clerk for Judge John Saunders in the Louisiana 3rd Circuit Court of Appeals before opening her private practice in 1997. In addition to her own practice, she served as an Assistant District Attorney for the St. Landry Parish District Attorney from 1997-2020, including serving as Felony Section Chief prior to her election as Opelousas City Court Judge. She is a member of the Louisiana State Bar Association, Louisiana City Judges Association, Judges Association of the Third Circuit, Louisiana Judicial Council as well as the St. Landry Parish Bar Association for which she served as President in 2007. She is also a former member of the Louisiana District Attorneys Association. She served on the CASA Finance Committee from 2016 to February 2020, and is a member and President of the Rotary Club of Opelousas Sunrise.

She is a lifelong resident of Opelousas and is married to Michael Harden, Sr. They have five children and two grandchildren.